(INDIANAPOLIS) — The role of the chief justice of Indiana is expansive in both its responsibilities and importance. Loretta Rush brings a passionate commitment, and strong organizational skills and communication abilities to all aspects of her position.

The Indiana Chamber of Commerce has named Rush the state’s 2018 Government Leader of the Year. She will be honored during the organization’s 29th Annual Awards Dinner, presented by Anthem Blue Cross and Blue Shield, on November 13 at the Indiana Convention Center in downtown Indianapolis. 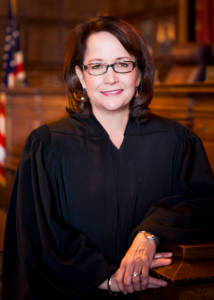 Rush was appointed as Indiana’s 108th Supreme Court justice in November 2012. Less than two years later, she was named chief justice by the Judicial Nominating Commission. In addition to her work with the four other justices on the state’s highest court, she supervises the entire judicial branch, including administration and funding of court programs across the state. In 2017, there were approximately 1.3 million cases filed in trial courts.

“Chief Justice Rush has greatly expanded the use of technology to allow the court system statewide to operate more efficiently,” says Indiana Chamber President and CEO Kevin Brinegar. “From administrative restructuring and establishment of Indiana’s commercial courts to her focus on trying to protect young people from becoming innocent victims of the actions of others, she is a true leader for Indiana and beyond.”

Rush, who spent 15 years at a Lafayette law firm and was a Superior Court judge in Tippecanoe County before her appointment to the state Supreme Court, is also co-chair of the National Judicial Opioid Task Force. Indiana’s courts, under her leadership, have taken a number of steps to support the expansion of drug treatment efforts.

Randall Shepard served as Indiana’s chief justice from 1987 to 2012.

“The bench and bar in our state widely agree that Loretta Rush’s leadership as chief justice is key to building a better court system for Indiana’s future,” he says. Citing her work in various areas, Shepard adds, “Chief Justice Rush is visible and inventive in finding ways to advance our state. She’s become recognized in national judicial circles as a leader who enriches the legal system, and she’s a source of pride for Indiana lawyers and judges.”

J.D. Vance, author of the New York Times best-seller Hillbilly Elegy and an advocate for entrepreneurial and business development in the Midwest, will keynote the Awards Dinner. Tables of 10 or individual tickets can be purchased at www.indianachamber.com/ad or by calling Nick at (800) 824-6885.

Additional sponsorships are available by contacting Jim Wagner at (317) 264-6876 or [email protected].