When I started working on my Road Trip Treasures entry about Indiana festivals, I realized I had more personal experience with unique or unusual festivals than I first considered. In fact, I don’t have to look very far for an example of a festival that has been part of my family’s tradition for many years (and now spanning multiple generations).

One of the earliest things I learned about my husband and his family was their regular attendance at one of several Native American pow wows throughout the state. Not long after my now-husband and I started dating, I profiled him and his family’s participation in the pow wows for our college newspaper.

Another important piece of the pow wow heritage is its tie to America’s military. Many of the men and women who attend pow wows are veterans, including my father-in-law, a veteran of the United States Marine Corps. Observing him and other veterans and listening to their stories at the pow wows is always a neat experience. 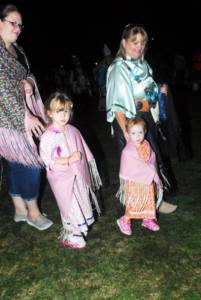 What’s a pow wow? It’s a one-of-a-kind experience, truly. Drum circles pound out steady and mesmerizing beats while singers chant melodies that are haunting and beautiful. Vibrant clothing and late-summer heat swirl around you as you dance in a large circle around the musicians. A feel of community and family tradition is threaded through the entire event. The smell of ritual sage smudging hangs in the air.

Shop at the flea market and craft vendors during the day or get an elephant ear at a food truck. Campfires and libations keep friends up late into the night.

I didn’t understand it when we first started going and I’ll admit it’s still strange to me at times. But it’s been clear to me from the beginning that the pow wows are a show of respect and admiration and ensuring Native American traditions are passed down to future generations.

My daughters, ages six and four, love attending pow wows. They enjoy the dancing and spending time with their grandparents and camping, but they are also learning about the history and culture they see presented around them. A culture they would otherwise only see in museums or on television.

There are several pow wows throughout the year in Indiana. If you’ve never been, I encourage you to go and observe – or participate in – the dancing and culture.

For more on the traditions and economic impact of festivals to our state, be sure to check out my story (with a few first-person experiences at the Pierogi Fest in Whiting and the Peru Amateur Circus and Festival) in the September-October edition of BizVoice. Find it here.