(INDIANAPOLIS) — Governor Eric Holcomb has been selected the 2019 Birch Bayh-Richard Lugar Government Leader of the Year by the Indiana Chamber of Commerce for his Next Level agenda – in particular his focus on the opioid epidemic and its impact on community, families and the workforce.

“Substance misuse has hit Indiana hard and the Governor has responded with a variety of initiatives to help Hoosiers,” offers Indiana Chamber President and CEO Kevin Brinegar. “His partnership with us on the Indiana Workforce Recovery program has enabled employers throughout the state to receive detailed guidelines on what steps they can take and a better understanding of the positive role they can play with their workers to get them back to being a more productive employee and person.” 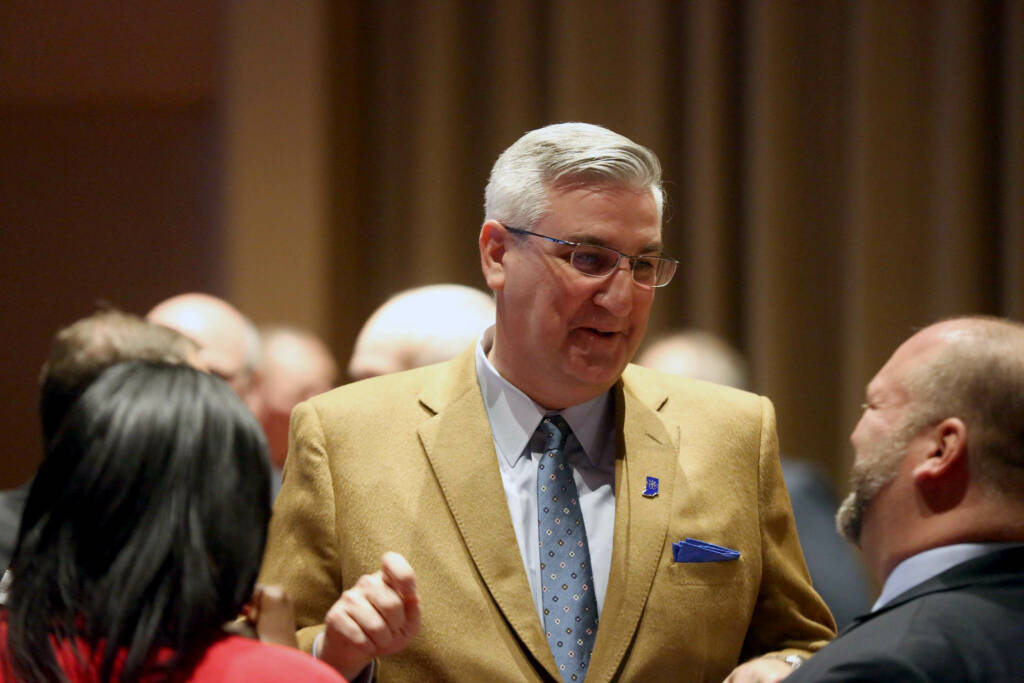 Holcomb says, “As I’ve traveled the state, I’ve met many individuals directly touched by the drug crisis. They want their life back, their family back and they want to recover and realize their true potential. We’re working every day to give more people that chance.”

The Governor also picked up the mantle on several long-sought legislative policies, which have crossed the finish line during his administration. From increased pre-K opportunities for children from low-income families to major long-term road funding to broadband service expansion in rural parts of the state.

“Then this year, he led the charge for Indiana to pass hate crimes legislation. Without his strong desire to see a meaningful law on that, nothing gets done,” declares Brinegar.

The Last Mile program, now at five correctional facilities, is another example of Holcomb’s push to help skill up the workforce and fill employers’ open jobs. In August, the first graduation was held at the Indiana Women’s Prison for offenders who successfully completed coursework to learn software engineering skills and how to code.

Over the last two years, the Next Level Jobs initiative has provided valuable assistance to companies retraining their employees and to individuals looking to boost their skills. More than 1,600 employers and 27,500 workers have taken advantage of the state-paid training.

“We’re looking to the future, positioning our state for 10 years from now, 15 years from now and beyond,” Holcomb says. “By creating opportunities for individuals, families, businesses and communities to thrive, we’ll make Indiana the best state in America for people to live, work, play and stay.”

The Indiana Chamber’s 30th Annual Awards Dinner, presented by Anthem Blue Cross & Blue Shield, takes place November 7. During the evening, the Indiana Chamber will also pay tribute to two of the state’s most iconic public servants, former U.S. Sens. Birch Bayh and Richard Lugar. Both passed away earlier this year at ages 91 and 87, respectively. With the support of their families, the Indiana Chamber’s annual recognition of a government official dedicated to improving the business climate in our state has been renamed the Birch Bayh and Richard Lugar Government Leader of the Year award.

“Senators Bayh and Lugar have had among the most impactful and distinguished careers of any member of the U.S. Senate,” praises Brinegar. “They have been great ambassadors for our state. We look forward to honoring their legacy each year as part of our annual awards celebration.”

Activities will be held at the Indiana Convention Center in downtown Indianapolis and also include presentation of three additional awards: the Republic Airways and LIFT Academy Community of the Year (Plymouth), Dynamic Leader of the Year (John Thompson) and Ogletree Deakins Business Leader of the Year (which will be announced September 24).

Democrat political strategist Donna Brazile and Republican commentator Dana Perino, two prominent political voices at Fox News with links to the White House, are teaming up to keynote the dinner. Seating is limited. Tables of 10 start at $1,650; individual tickets are $165 each. Either can be purchased online at www.indianachamber.com/ad or by calling (800) 824-6885.

The event’s opening reception sponsor is PNC. The speaker sponsor is OneAmerica.

Additional sponsorships for the Indiana Chamber’s 30th Annual Awards Dinner are available by contacting Jim Wagner at (317) 264-6876 or [email protected].