Tech Talk: Losing Our Minds – So to Speak

The title of a recently published report refers to a common topic – brain drain – but with a comprehensive and analytical approach. Produced for the Joint Economic Committee of Congress, the researchers go back to the 1940s and look at the talent exodus through a variety of measures.

Researchers concluded that Indiana, along with the majority of other “Rust Belt” states (e.g., Pennsylvania, Ohio, Michigan, Wisconsin and Missouri), fare worst at retaining and attracting highly-educated adults. 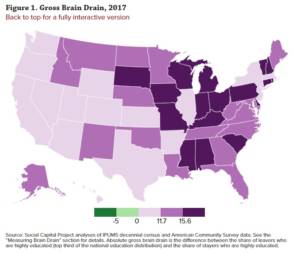 The full report (with colorful maps, charts and figures) compares and contrasts the states. Below is a portion of the Executive Summary:

Over the past 50 years, the United States has experienced major shifts in geographic mobility patterns among its highly-educated citizens. Some states today are keeping and receiving a greater share of these adults than they used to, while many others are both hemorrhaging their homegrown talent and failing to attract out-of-staters who are highly educated. This phenomenon has far-reaching implications for our collective social and political life, extending beyond the economic problems for states that lose highly-educated adults.

This report describes what this so-called “brain drain” looks like across the 50 U.S. states. We use data from the 1940 through 2000 decennial censuses and the 2010 and 2017 American Community Surveys to measure brain drain in each state.

We define a highly-educated “leaver” as someone in the top third of the national education distribution who resides in a state other than her birth state between the ages of 31 and 40. We then analyze brain drain using two measures: “gross” brain drain and “net” brain drain.

We find that brain drain (and brain gain) states tend to fall along regional lines, although there are a number of exceptions to this general rule. Overall, dynamic states along the Boston-Washington corridor (Massachusetts, New York, New Jersey, and Maryland), on the West Coast (California, Oregon, Washington), and in other parts of the country (Illinois, Texas, Colorado, Arizona, and Hawaii) are the best at retaining and attracting highly-educated adults.

Our report provides evidence that highly-educated adults flowing to dynamic states with major metropolitan areas are, to a significant extent, leaving behind more rural and post-industrial states. This geographic sorting of the nation’s most-educated citizens may be among the factors driving economic stagnation – and declining social capital – in certain areas of the country.