On December 5, members of the American Workforce Policy Advisory Board, including co-chairs Ivanka Trump and Wilbur Ross, toured the Indiana Women’s Prison. They were there in large part to learn more about “The Last Mile” program, which provides inmates computer education and training to become software engineers. Governor Holcomb, who co-chairs the board’s Data Transparency Working Group, referred to the visit as an opportunity to “showcase … the truly transformational work taking place at the Indiana Women’s Prison.” 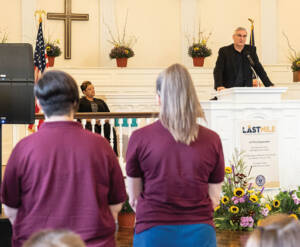 So, what is The Last Mile and why is it such a big deal? According to its web site, “the program prepares incarcerated individuals for successful re-entry through business and technology training.” In addition to coding classes, the program provides mentorship and job placement services after the inmates are released.

(In honoring Holcomb as the 2019 Birch Bayh-Richard Lugar Government Leader of the Year, the Indiana Chamber’s BizVoice® magazine attended the first graduation ceremony at the Indiana Women’s Prison; story and video here. In addition, in the March-April 2019 issue, BizVoice included this story on workforce re-entry).

Co-founders of the program claim there is a 0% recidivism rate among its graduates, which is astonishing given that 83% of state prisoners released in 2005 were arrested at least once during the nine years following their arrest. Currently, there are approximately 48,000 people incarcerated in Indiana, 4% more than the same period last year and nearly 12% more than in 2016.

Chris Redlitz conceived The Last Mile program in 2010 after visiting with inmates at the San Quentin (California) State Prison. He began to nurture the idea of creating a technology accelerator inside the prison with his wife, Beverly. In December 2010, The Last Mile started entrepreneurship programing inside San Quentin and graduated six students in May 2012.

In April 2018, Indiana became the first state outside of California to offer the program and, as of August 2019, there were 67 students across five Indiana correctional facilities. In total, The Last Mile is in 19 classrooms located in California, Indiana, Kansas, Michigan and Oklahoma and has graduated 577 students since 2010.

When The Last Mile launched in Indiana, Gov. Holcomb challenged the Indiana Department of Corrections to train and graduate 1,000 or more offenders each year into high-demand occupations by 2020. The Last Mile is a critical part of this much-needed workforce pipeline as there are more than 80,000 unfilled jobs across Indiana with approximately 50% of those being tech-related. Certainly, employers need to become more comfortable hiring ex-offenders; the 0% recidivism among The Last Mile graduates should serve as a pretty strong letter of reference.