I only met Pete Dye once. It was last summer at a celebration of life for his wife, Alice. Alzheimer’s had already taken hold of Pete, who died Thursday at the age of 94, so I can’t claim to have been a close acquaintance. 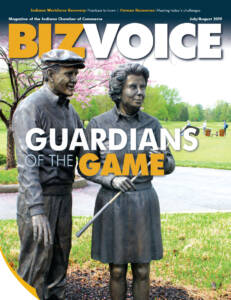 But I did have the cherished opportunity in the spring and summer of 2019 to talk to many people who knew the Dyes well. The story of the “First Family of Golf” was filled with so many anecdotes and accolades that it was featured in two issues as part of our BizVoice® magazine Indiana Icons series. Take a journey through 18 holes with the Dyes here and here.

We won’t even begin to try and recount the impact of the designer of many of Indiana’s – and the country’s – most iconic and visually intimidating golf courses. But we will let Jack Nicklaus, who says he owes his career in golf course design to Pete, have the first and maybe last word. (Heck, the fact that Jack Nicklaus returned my telephone call shows what he thought of the Dyes).

“I just think Pete was way ahead of his time. He did things that nobody else would do. He took a chance on them, and that’s why he was so good. He just was brilliant at what he did.”

OK, I can’t resist. One more word from son P.B. Dye (he and brother Perry are also renowned course designers). “I can tell you that my mother and father loved the game of golf, and the game of golf loved them back. I can’t imagine anyone ever saying mom and dad have taken from the game of golf. They’ve always given.”