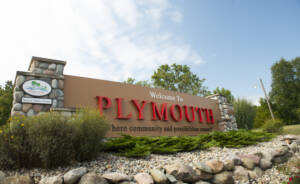 You can just tell when someone loves his or her job and takes great pride in spreading the news about what’s going on at work. Plymouth Mayor Mark Senter is one of those people.

He has joy in his eyes and enthusiasm in his voice as he talks about his community and its accomplishments.

And you can tell he revels in telling stories, about his beloved Plymouth, long before it was chosen as the
2019 Republic Airways and LIFT Academy Community of the Year.

Senter, a former Indiana State Police detective, gave BizVoice® examples of just how the city’s business community has transported little pieces of home around the country and across the globe.

“Last month, I was being interviewed by CBS 48 Hours for an old murder case that I worked,” the mayor explains in an August conversation. “For an hour and a half, I was in the hot seat. There was a camera on a track moving slowly, back and forth, the entire time. When we were done, I asked, ‘Do you know who made that track?’”

“The camera track was made here in Plymouth, Indiana,” Senter notes. “I love to see that.”

He said he keeps his eyes open during his travels outside of Plymouth for any locally made products.

“I love to see Hoosier Tires at a race in Australia. You know, if you see a box of peanut butter pretzels in Arizona, they’re probably made in Plymouth (at Pretzels Inc.).”

Another company with international ties is Zentis USA, which prepares fruit to be placed in yogurt and baked goods. And who hasn’t seen a sign for Pioneer Seed on the side of any highway or country road?

The mayor simply can’t brag enough on the city and its people.

He boasts: “We have a company that makes some bubble wrap – that’s Plymouth air in those bubbles!”

Yep, the stories are endless – and that’s such a great thing for Plymouth!