If you grew up anywhere near west or west-central Indiana, chances are you’ve spent some time at Turkey Run State Park.

I’m from one county over (shout out, Putnam County!) and we played tennis tournaments at the state park, hiked there during the summers with school or church youth groups, cooled off in Sugar Creek, explored amazing rock formations and just spent time enjoying our natural resources. 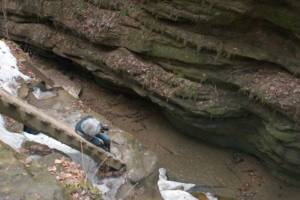 There’s a soft spot in my heart for the state park and I’m happy to see it’s been named to the National Register of Historic Places.

Several of Indiana’s state parks are already listed on the register, and there are qualifications the park had to meet to be eligible for the protection afforded the designation. According to a press release from the Indiana Department of Natural Resources, listings on the register are at least 50 years old and don’t look much different than they did in the past.

While at least one piece of Turkey Run was already on the register (the Lusk Home), the new listing includes more:

The historic district starts north of Sugar Creek, to Narrows Road on the east, to State Road 47 on the south and Cox Ford Road on the west. Trails and the Lusk Home are the farthest north resources and Ford Covered Bridge is the farthest west.

Pokagon, Mounds, Shakamak and Fort Harrison state parks already have historic districts within their boundaries. Other individual buildings listed within state parks include the Stanley Schoolhouse at Chain O’Lakes State Park and Tepicon Hall at Tippecanoe River State Park, among others.

Turkey Run’s state and national register certificates will be presented to property representatives at the State Fair in August.

If you haven’t had the chance to visit Turkey Run, the warming weather presents the perfect opportunity to get outside and explore one of Indiana’s natural playgrounds. Find Turkey Run State Park at 8121 East Park Road in Marshall, Indiana.