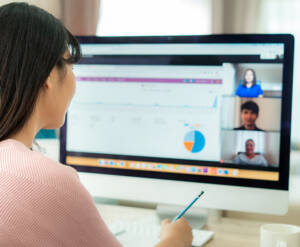 Is video conferencing a fad or is it here to stay? Last Thursday, Zoom Video Communications (Zoom) announced that it had reached 300 million active users, up from 200 million at the beginning of April, and Zoom stock hit an all-time high on the news.

On Friday, Facebook unveiled Facebook Messenger Rooms (Rooms), a new feature that makes it possible for up to 50 people to meet together in a video conference call for free with no time limits or separate software download. The sessions can be joined from a phone or computer. Facebook is rolling out Rooms on a country-by-country basis, but it did not provide details on timing or which countries would be coming first. Additionally, Facebook is expanding WhatsApp video and voice group calls to up to eight simultaneous users.

Today, between the existing Messenger and WhatsApp, more than 700 million accounts participate in voice and video calls every day, and the number of calls has more than doubled in many countries since the pandemic began. In some cases, according to Facebook, the number of group video calls has increased 10 fold.

Whether video conferencing will become part of the “new normal” depends largely on access to and the continued stability of high-speed broadband networks. Access to high-speed broadband has been – and will continue to be – a challenge for rural America, including many throughout Indiana. The networks, however, have proved impressive, handling, in some instances, a 70% surge in at-home internet traffic. Wireline broadband providers report that total traffic increased by a range of 17.3% to 37.4%, with an average increase of 25.5%.

Over the major wireless carriers, mobile voice traffic during COVID-19 has escalated between 7% and 24.3% from pre-crisis levels, and mobile data traffic usage has increased between 0.7% and 9.2%.

For example, AT&T reported wireless voice up 28% and Wi-Fi calling minutes up 84% from the pre-crisis average usage baselines. Similarly, Verizon announced online gaming has tripled and that it is handling 800 million calls per day, twice the number of calls on what is normally the busiest day of the year: Mother’s Day.

For its part, Comcast’s network is also handling the pandemic well despite peak internet traffic increasing as much as 60% in places like San Francisco and Seattle and 32% across its national network.

The gig economy was a product of the 2008 recession, producing companies like Uber and Airbnb. We can be confident that video conferencing – and variations of it – will be around for a while. And, as business executives, staff, clients and customers grow accustomed to its convenience and effectiveness, one might predict that it will be here to stay even in our post-pandemic era.

There will be ramifications, however, when “meeting” digitally earns favor and in-person interactions become less common. We will discuss these likely consequences in a future Tech Talk.