While the focus here, of course, is on investment and growth in Indiana’s tech and innovation communities, one must be aware of what is taking place elsewhere. We share some updates from neighboring states to the north and east. 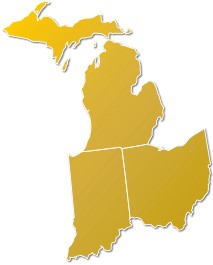 Pete Wilkins, managing director of Hyde Park Angels, recently wrote about what he sees as growing strength in Michigan. A few excerpts:

According to my analysis of PitchBook’s data for Michigan over the last 10 years, the state has received 250 percent more startup investment in the past 5 years – $1.4 billion – than it received in the 5 years prior ($577 million). In addition to attracting capital from major investors like Sequoia, Accel, and Naspers (among others), a number of Michigan-based funds have emerged to help the motor capital of the world become an emerging startup ecosystem.

One example of how Michigan’s startups continue to build on one another comes from the 2010 acquisition of Arbor Networks by PE firm Danaher. A student and a professor from Ann Arbor’s University of Michigan founded Arbor Networks in 2000.

While Ann Arbor’s startup ecosystem arguably has the most longevity, Michigan’s entrepreneurial transformation does not end there. In 2010, Quicken Loans announced that it would move its 1,700-person office to downtown Detroit. Since then, Quicken Loans founder Dan Gilbert has gone on to invest in more than 100 startups through Rock Ventures.

Perhaps the most compelling sign of the Michigan ecosystem’s growing strength, however, is that the Ann Arbor and Detroit communities are beginning to connect.

For two cities that are closer than San Francisco and San Jose, there is a great deal to be said for the opportunity that exists when the density, resources, and talent in distinct cities builds to encompass an entire region. Ann Arbor and Detroit have respectively made enormous strides since 2010 and collectively in the last year. With startup cities like Grand Rapids and Lansing extending from this epicenter, it will be interesting to examine the state of Michigan’s entrepreneurial ecosystem in another 5 to 10 years.

The State Science & Technology Institute offers the following on plans in Ohio:

Industry-led “innovation hubs,” additional funds for risk capital, and a proactive talent strategy are among the recommendations included in Ohio BOLD: A Blueprint for Accelerating the Innovation Economy, a new strategic plan conducted by Columbus-based TEConomy Partners on behalf of the Ohio Chamber of Commerce Research Foundation.

Developed as a way to inform a new gubernatorial administration of the Chamber’s priorities, the plan identifies opportunities around four platforms: next-gen manufacturing, future health, smart infrastructure, and data analytics.

Regional “Innovation Hubs” — centers of R&D and commercialization activity that bring together industry, research institutions, and the public sector — would represent each of these platforms. To support access to capital, the authors recommend continuing to fund the state’s Entrepreneurial Signature Programs, a key Third Frontier initiative, and expanding their responsibilities to support these innovation hubs.

A strategy to develop, retain, and attract talent would offer financial incentives to recent graduates, as well as senior and mid-level professionals, to pursue Ohio-based careers in the aforementioned platform industries.

The authors recommend tapping into the Third Frontier reserves, using the liquor sales revenue that funds the JobsOhio program, and identifying federal funds and private capital to help fund these initiatives.