The end of the first half of the legislative session comes early next week. Your Indiana Chamber advocacy team is once again leading the way on several key technology and entrepreneurship measures. Here is a brief rundown:

Senate Bill 563, also known as Gov. Holcomb’s economic development bill, has many important provisions to help attract talent, businesses and capital. The most important feature is making the Venture Capital Investment (VCI) tax credit transferable, opening the door to significant out-of-state investment. These investors could earn the VCI credit by investing in Indiana businesses and then selling the credit to Indiana companies with state tax liabilities. 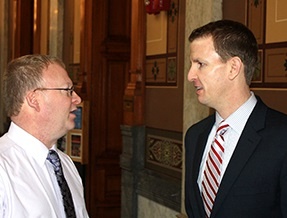 Indiana is currently not competitive in the recruitment of data centers, which do not create large numbers of jobs themselves but attract companies (and investment) that utilize the data center services. The legislation passed the House Ways and Means Committee unanimously and the full House 95-1.

Indiana’s existing tax credit has become less competitive over time as other states have “upped their game.” The Chamber and its Tech Policy and Economic Development committees have been keeping this issue in front of legislators the last several years. SB 563 passed the Senate Tax and Fiscal Policy Committee on Tuesday and now proceeds to the Senate floor.

SB 460 amends the definition of “public utility” to include broadband providers and exempts these providers from unwarranted state regulations if they are exempt under federal law. Enhanced broadband access is another key goal in the Chamber’s Indiana Vision 2025 economic development plan. This bill passed the full Senate 49-0.

I’m thrilled to have recently joined the Chamber team in this role, and I am backed by colleagues who have been working on these and other important issues in recent years. Please feel free to reach out if I can provide additional information on legislation or other technology and entrepreneurship topics.