Talk to Yourself? It’s Totally Fine!

Anyone who has children will understand the concept of talking to yourself. Not that you’re expecting a response, mind you, particularly when your children are babies and if they are your only source of human presence for long stretches of time. (Oh, the memories of being a stay-at-home mom!) 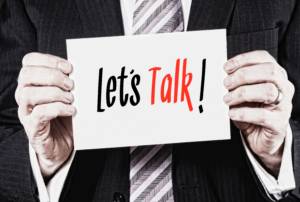 Did you know that talking to yourself is not only fine, but that it can be advantageous?

(Okay, a caveat – as long as it’s not an actual hallucination or mental health issue. When I say “fine,” I mean you know you’re only talking to yourself and no one else.)

This article from NBC News offers three ways to get really good at talking to yourself.

“Talking to ourselves is completely within the norm. In fact, we talk to ourselves constantly,” says Dr. Jessica Nicolosi, a clinical psychologist based in New York. “One can argue that just thinking things through quietly, without speaking out loud, is talking to ourselves.”

She adds that, in the same way we seek trusted companions to bounce ideas off of, we talk to ourselves for many reasons. This often occurs when we’re experiencing a deepened emotion, such as anger, nervousness, extreme focus or excitement. Even in otherwise mundane scenarios it’s typically an emotion that’s triggering us to speak out loud. For example, you may feel some stress about turning left or anxious being late if you don’t locate your keys.

Three Ways to Master the Art of Talking to Yourself

Dr. Julia Harper, an occupational therapist and life coach, agrees that it’s normal for us to talk to ourselves, but stresses that it’s important to do it the right way. “Self-talk is a normal part of the development of language,” she says. “[It improves our] higher order cognitive and meta-cognitive skills and is a fundamental part of self-mastery. Because of its functionality, not only do we all self-talk, it would behoove us to do it well.” Here’s how.

Be kind to yourself: There’s anecdotal evidence, and even a handful of scientific studies, that confirm the positive effect words of encouragement can have on performance. (Interestingly, sports psychology is leading the research on this topic.) It makes sense, then, that negative self-talk serves us poorly and ought to be avoided.

“If we’re talking to ourselves negatively, research suggests that we’ll more likely guide ourselves to a negative outcome,” says Dr. Harper. “However, when self-talk is neutral — as in a statement like ‘What do I need to do?’ — or positive, such as ‘I can get this done,’ then the outcome is much more effective.”

What we say to ourselves, when we say [it], and how, has a tremendous impact on our self-esteem, beliefs about self-efficacy, and overall sense of worth.

This may all seem very obvious, and yet negative self-talk (spoken or thought) still happens regularly. For that reason, it’s important to be aware when it happens and to actively nip it in the bud.

“What we say to ourselves, when we say [it], and how, has a tremendous impact on our self-esteem, beliefs about self-efficacy and overall sense of worth,” says Dr. Nicolosi. “When working with my patients, the focus is less on whether they talk to themselves, and more about the content of those conversations.”

Use self-talk to your advantage: Cheering yourself on before an important event or talking to yourself while completing a task are two great opportunities for self-talk. In fact, a small study published in the Quarterly Journal of Experimental Psychology found that when looking for familiar items (like those keys), speaking to themselves and saying the name of the item out loud helped people find the objects more quickly.

You can also use self-talk to work through extreme emotions — including anger, sadness, confusion and stress — and to sort out personal conundrums. Consider the act a sort of “spoken journal to yourself.” (If doing so was good enough for Socrates and Plato via “Socratic Dialogue,” it’s good enough for us.) As an extension of that idea, it’s also argued that talking out loud while studying can help expedite and cement your understanding of the topic, notes Dr. Don Vaughn, a neuroscientist who studies human behavior.

“One study found that asking oneself out loud what a piece of information means significantly improved learning,” explains Dr. Vaughn. “A hypothesized explanation for this phenomenon is that the process of answering a question improves consolidation of information from working memory into long-term memory. One is effectively speeding up the learning process by acting as both the inquiring teacher and the challenged student.”

Don’t forget to listen: “It’s important to note that [talking to yourself] is a two-part process: the talking and the listening,” says Dr. Harper. “Self-listening, otherwise known as self-awareness, is a primary factor in offering feedback for self-efficacy.”