Taking to the Air

There is no shortage of expansion and modernization projects taking place at airports across the United States and internationally.

Some of the biggest are in Chicago; Los Angeles; Newark, N.J.; New Orleans; New York; Pittsburgh and Washington. O’Hare is getting an $8.7 billion expansion. American and United airlines will share a new domestic and international terminal, making it easier for travelers to connect. Other terminals are getting upgraded gates.

New York is trying to improve its major airports. Passengers can take the subway to LaGuardia in 2022. A $10 billion project is being developed for JFK. Pittsburgh, which was a hub for defunct U.S. Airways, is replacing that terminal. Cost: $1.1 billion. 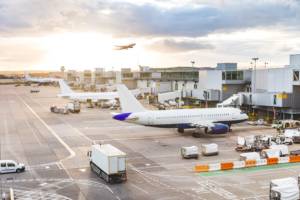 Some of the world’s largest cities are getting new airports. First up: Beijing. Daxing should open next fall and help relieve Beijing Capital, which is at capacity. It costs $13 billion, will have eight regular runways and a high-speed train to Beijing. Istanbul will be home to the world’s largest-capacity airport by 2030. Atatürk, its main hub, is the world’s 15th busiest. Officials plan Istanbul Airport to supplant it as the city’s major international airport … 150 million flyers could use its four terminals annually once it’s fully functioning.

Mexico City completed one-third of its new airport, but the $13 billion project is on hold after the public voted against finishing it. London’s Heathrow is spending $18.5 billion to add a third runway by 2026. Singapore’s Changi is linking three of its four terminals, adding seven retail stories that will feature an indoor garden with walking trails and waterfalls by next year.

Tom Schuman is the senior vice president of communications & operations for the Indiana Chamber. He is also the editor of the Chamber’s award-winning BizVoice magazine and has been with the organization for 20 years.