Claire Baney has her sights set on the National FFA. The Purdue University freshman is competing against students across the United States for one of six National FFA officer positions.

The officer selection will take place in Indianapolis later this month, during the National FFA Convention & Expo October 24-27. 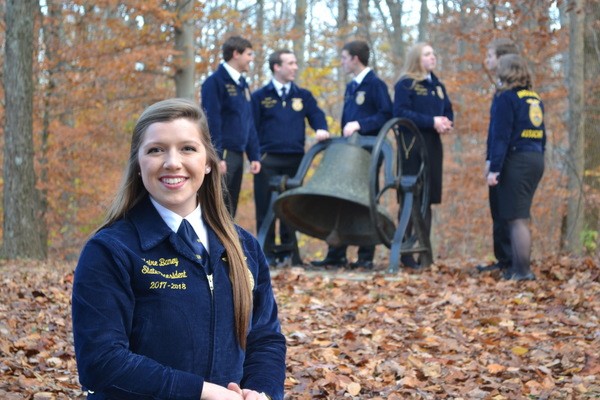 “I want to show students that they have the power to learn and better serve their communities, and that what they are doing truly makes a difference,” Baney said in a press release from the Indiana State Department of Agriculture (ISDA). “Ultimately, I don’t think of this as a competition. I just want the six best candidates to serve the National FFA Organization because that’s what our members deserve.”

Baney, a native of Fishers and graduate of Hamilton Southeastern High School, is not a stranger to holding high office positions within the FFA. She was the 2017-18 Indiana FFA state president. She served more than five years and participated in 4-H, as well as serving on the Hamilton County Purdue Extension Board and the Mayor’s Youth Council in Fishers.

“The impact that FFA has had on my life and countless others is tremendous,” Baney said in the release. “I understand that everyone wears the blue jacket for the final time, but I truly feel like I have more to give to students, members of FFA and to the organization that has given so much to me.”

Baney will compete for one of the top national spots in the organization through a weeklong selection process, evaluated on written and verbal skills, her ability to facilitate classroom discussions and more, according to the ISDA press release. As an officer, if Baney is selected, she’ll travel the country to promote the FFA.

Good luck in your pursuit, Claire!