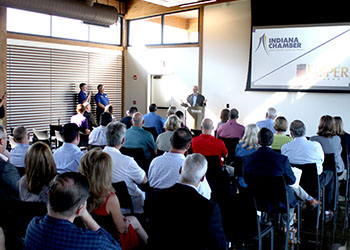 A lively group of business and community leaders gathers around a large table at the Schnitzelbank Restaurant. The venue, the people and the conversation reflect Jasper’s proud German heritage.

Eagerly, the public and private sector leaders share insights into why they believe Jasper was chosen and deserves to be the Indiana Chamber’s 2018 Community of the Year.

They describe events such as the 40th Annual Strassenfest festival. They talk about attracting and cultivating a competitive workforce. The consensus: “It’s all about talent.”

They emphasize the power of change as well as developments such as The Parklands of Jasper, Thyen-Clark Cultural Center and Jasper River Centre.

Among the group is Jim Thyen, former president and CEO of leading furniture manufacturer Kimball International. He and wife, Pat (Clark) Thyen, are heavily involved in community philanthropy.

“We were a community in the mid-’90s that took a great deal of pride in being self-reliant,” he asserts. “We talked about our German heritage and we actually felt like, we needed nobody else. And when you look at how things have evolved – (Interstate) 69 is 20 miles away. (Interstate) 64 is 20 miles away. … We started to realize that we were not the center of the universe, and if we didn’t start to join the world, it was going to move right on by.”

Mayor Terry Seitz puts his spin on what makes Jasper such a special place.

“I have found that we are truly a community of doers – whether it’s the planning for the doing or just going out and getting things done. I’ve said several times to people who live in Indianapolis that are on state committees, ‘If you want to get something accomplished, have somebody from Jasper run your group and it will get done.’ ”

Jasper will be honored November 13 at the Indiana Chamber’s 29th Annual Awards Dinner. Read more about its award (in a September 5 press release) and the event.

Symone Skrzycki is the communications manager for the Indiana Chamber. She is also a writer for the Chamber’s award-winning BizVoice magazine and has been with the organization for 18 years.