(INDIANAPOLIS) — The Indiana Chamber of Commerce has released its annual report scoring state legislators on how they voted on key business legislation in the recent General Assembly. For 2019, lawmakers’ scores ranged from 27% to 100%.

“The Legislative Vote Analysis is how we hold lawmakers accountable for their voting records and is an important source of information for employers and citizens across our state,” says Indiana Chamber President Kevin Brinegar.

“The report’s purpose is to keep Hoosiers informed about what’s going on at the Indiana Statehouse and how their legislators are voting on issues vital to Indiana’s economic future. This report makes it clear which legislators support pro-job growth and pro-economy issues and which legislators do not.”

The scores are available on the Indiana Chamber’s web site at www.indianachamber.com/lva. 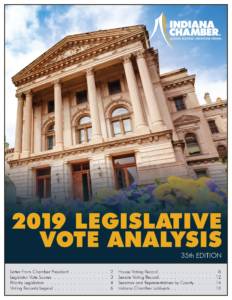 Brinegar calls these important wins, and all are top policies for the Indiana Chamber, but he says one “big failure to act” can’t be reflected in the report.

“One of our priorities – smoking reform – was once again ignored at the Statehouse, with no floor votes being taken on increasing the cigarette tax or raising the legal purchase age from 18 to 21. So unfortunately, there is no opportunity to score legislators on this issue.”

Legislators who score 70% or greater for the most recent four-year voting period are eligible for endorsement consideration by the Indiana Chamber’s political action committee, Indiana Business for Responsive Government.

Lawmakers are notified of the Indiana Chamber position and reasoning on the bills in this report through various communications during the legislative session – and prior to key votes being taken. Only floor votes for which there is a public record are used in the Legislative Vote Analysis.

The Legislative Vote Analysis is distributed electronically to all legislators and Indiana Chamber board members, and made available online for all businesspersons, community leaders and citizens.

This marks the 35th year the Indiana Chamber has measured state legislators’ voting performance on bills that reflect the organization’s public policy positions.