(INDIANAPOLIS) — The Indiana Chamber of Commerce has tapped Chuck Baldwin, one of two managing directors of the Ogletree Deakins law firm, as chairman of its board of directors for 2018.

Based in Indianapolis, Baldwin has over 25 years of experience in labor and employment law and is part of the Ogletree Deakins leadership team that oversees 52 offices in 28 states and throughout the world. He began serving on the Indiana Chamber board and its various committees in 2000.

Baldwin has been a featured speaker at Indiana Chamber conferences and seminars throughout his involvement with the organization, and has authored articles and co-authored a number of Indiana Chamber compliance publications. He’s also a contributor to BizVoice® magazine on employment law issues and previously was chosen an Indiana Chamber Volunteer of the Year for his varied efforts. 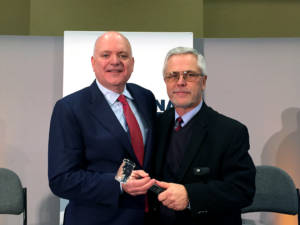 “For 17 years, Chuck has been an active and engaged member of our board and he has lent his time and expertise to various policy committees and Indiana Chamber events and publications,” states Indiana Chamber President and CEO Kevin Brinegar. “It’s a natural fit for him to step into the role of board chairman and we look forward to his strong leadership over the coming year.”

Baldwin’s chairmanship duties for the Indiana Chamber extend through the group’s next fall board meeting in November 2018.

“I’m honored to have been named board chairman for the Indiana Chamber of Commerce,” Baldwin says. “I’ve been involved with the Indiana Chamber for nearly two decades and I’m looking forward to leading the outstanding work that the Chamber provides for business leaders throughout the state.”

More than 100 members make up the Indiana Chamber board; they are presidents, CEOs and high-level executives from organizations around the state.