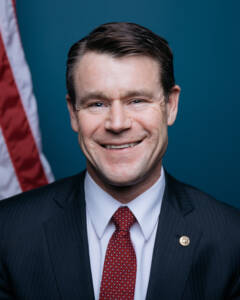 The spread of the novel coronavirus from China to the rest of the globe has heightened Americans’ awareness of the deep connections, and serious vulnerabilities, that shape our lives in the 21st century.

Before this pandemic, many Americans may not have realized the centrality of China to our pharmaceutical supply chain.

My colleague, Sen. Chuck Grassley, recently sounded the alarm that a staggering 80% of the basic components used in U.S. drugs come from outside the United States, with the majority coming from China and India.

Now, as Americans work to contain the spread of this pandemic, we remain hamstrung by a lack of transparency from the Chinese Communist Party about the origins of the virus. All the while, China confuses Americans through coronavirus misinformation campaigns designed to spread lies and conspiracy theories. Most offensively, China has been hoarding vital personal protection equipment.

And, by virtue of being the first to emerge on the other side of this pandemic, the Chinese Communist Party is working hard to use the crisis to its advantage by extending its influence over the world’s economy.

A new report from the Chinese Academy of Sciences bluntly observes: “It is possible to turn the crisis into an opportunity — to increase the trust and the dependence of all countries around the world of ‘Made in China’.”

The chairman of China’s state-owned National Building Materials Group Corporation adds that China will “turn crisis into opportunity: It will transform and upgrade and strengthen its position in the international industry chain.”

Such statements are representative of the ambitions of the Chinese Communist Party. America must respond smartly.

There are growing calls to “decouple” the American and Chinese economies. I share their concerns but, as I explained in a recent speech at Indiana University, it is neither realistic nor practical to build an economic iron curtain around China.

Instead, now is the time for America and our allies to invest in ourselves, and give the world a clear alternative. With advanced technology, and a stronger economy, America will maintain the wherewithal to meet the challenges that an increasingly assertive China poses to our national interests.

China understands this. This is why, amid this global pandemic, China aims to overtake America in 21st century innovation. New technologies such as 5G, quantum computing, artificial intelligence, and advanced energy systems have the potential to fundamentally change this century’s economic and security environment for good or ill. America and our allies cannot fall behind in the race to innovate without undermining our prosperity and security.

Until now, the United States has primarily focused on defensive counter-measures to thwart aggression by the Chinese Communist Party: blocking Huawei, tightening export controls, and improving foreign investment rules. Defensive approaches will remain important, but if America is to lead the world in the 21st century we must go on offense, just as we did in 20th century.

This is why I am proposing that we strategically invest in America’s industries of the future as part of our economic recovery initiative.

America’s history is filled with bold initiatives and calculated investments that have harnessed America’s ability to collaborate across the public and private sectors. From the Manhattan Project to the development of a vaccine for polio to the Space Race, America has demonstrated that we can become richer and safer by leading the world in innovation.

We can do it again.

I am working on a bipartisan National Innovation Strategy to prioritize federal investment in key technologies. The idea is to catalyze innovation and grow jobs by boosting investment in research focused on discovering, and commercializing emerging technologies.

The private sector is excellent at applied research which meets the near-term demands of individual consumers. Unfortunately, many of the technologies that will collectively benefit our citizens require basic research and long-term investments.

As we consider the current crisis, Beijing is fighting with both hands: they are responding defensively to shore up domestic industries; meanwhile, they are playing offense by working aggressively to exploit our economic downturn and expand China’s position in the world.

Further, as Google’s Eric Schmidt recently noted, if trends continue, China’s investments in research and development will surpass the United States within 10 years, around the same time their economy will become larger than ours.

It is imperative that America not be outflanked. We should implement a National Innovation Strategy to meet the challenges of this moment. When life resumes as normal, this generation of Americans must not be content with merely recovering our losses. Instead, we must position ourselves to lead.

Sen. Todd Young, a Republican, is the senior senator from Indiana. He is a member of the Senate Foreign Relations Committee, and chairman of the subcommittee that oversees foreign economic policy.

NOTE: The Indiana Chamber has a statewide employer coronavirus resources page – www.indianachamber.com/coronavirus – which provides information under three umbrellas: Health, Tools You Can Use and Government and Community Assistance.