Gen Z’s Time in the Spotlight

Multigenerational workplaces are common today. In fact, you’re hard pressed to find a workplace that doesn’t have at least two, if not three, generations working side by side. 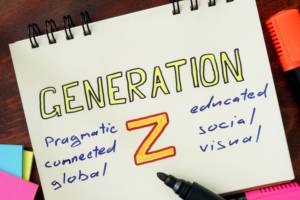 Get ready to add a fourth generation: Generation Z or Gen Z, for short.

It makes sense; members of this generation were born between 1995 and 2010 and are starting to move into the workforce. Do you work with any Gen Zers? If not, you will soon!

Forbes offers eight ways this new generation is compared to the millennial generation and outlines differences in the workplace. These include Gen Z being more motivated by security (in light of growing up during the Great Recession), potentially more competitive, better at multitasking and more entrepreneurial.

Here are a few other important differences:

You may have just gotten used to your millennial employees preferring to communicate over email or Slack, but be prepared to switch it up again. Generation Z likes to talk face to face. Fifty-three percent of Generation Z said they prefer in-person discussion over instant messaging or email.

This can be attributed to the negative attention they’ve seen millennials receive for their reliance on technology, or because the technology they’ve grown up with (Skype, Snapchat) has allowed people to communicate with a full range of sound and motion, instead of just text. Be prepared for regular in-person meetings with your Gen Z employees to discuss their projects as well as their professional development.

Millennials have long been described as digital natives, but they actually grew up in a world that was still full of landlines and dial-up internet. They’re used to progress taking time, and are just as confused by some of the newest apps as baby boomers are. Gen Z, on the other hand, has been living in a world of smartphones and free Wi-Fi for as long as they can remember. Ninety-two percent of them have some sort of digital footprint.

They easily flit between platforms and technologies and pick up new software quickly. Their relationship to technology may be even more instinctual than that of a millennial in their late 30s.

Gen Z Wants To Be Catered To

Gen Zers expect the workplace to conform to their needs. They are similar to millennials in this way, and are actually fairly similar to boomers as well. This attitude is having an effect on the workplace. In recent years, stars such as U2 and Bruno Mars performed at Salesforce’s annual conference. A decade ago, a huge company would never have hired a rock band to appeal to young people. Now, it’s pretty typical to have young attendees in mind.

There are some clear generational differences between millennials and the young people just entering the workplace today. Of course, every member of a generation is an individual and will have their own unique traits, but keeping these generalizations in mind could help you prepare to welcome this new generation to the working world.