Fly-in Brings Voice of Business to D.C.; Highlights Include McConnell and Trade/Tariff Talk 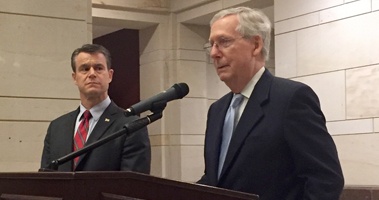 The Indiana Chamber’s annual trip to Washington coincided with all eyes on the Senate Judiciary Committee hearing involving the Supreme Court nominee. On Wednesday night at the dinner portion of our event, Senate Majority Leader Mitch McConnell of Kentucky touched on the duty of the Senate related to judicial nominees and the rarity of the current Republican control in the White House and both bodies of Congress.

Indiana’s member on the House Ways and Means Committee, Jackie Walorski (IN-02), addressed the growing impact of the Trump administration tariffs on the state’s employers and how her district, with its strong manufacturing base, is bearing the brunt. She mentioned she’s been keenly focused on this from the get-go and has been consistently speaking with the President, including in at least four face-to-face meetings.

“The message I carry to him is always a message of I’m with you on policy, we are with you on policy. I get this. I get the trade imbalance. I get that China is the bad guy in this. I get the billions of dollars they have stolen from our state and from our county – and the intellectual property. I get all that. But please use fairness and a scalpel when it comes to what we are doing with all these rights and everything that is pertaining with the rest of the story, which is what our job producers right now are definitely feeling.”

The Indiana Chamber is highly concerned about what tariffs are doing and will do to the state’s economy and appreciates Walorski’s efforts and those of the entire delegation for delivering that shared message to the President.

Congresswoman Susan Brooks (IN-5), a member of the House committee debating health care issues, talked about trends in that area and the effect of the opioid epidemic on Hoosiers and the Indiana workforce.

She predicted an uptick in activity in the telemedicine space, particularly in schools, and specifically highlighted the program in place in Elwood in which school nurses deal with both physical and mental well-being. “We are going to have, I would say, a real focus on technology – how to make sure the payment models work well to try to encourage that kind of innovation.”

Regarding opioids, Brooks stressed how the state and “every community, every county I represent does have a significant focus on the issue.“ She talked about the workforce impact and “seeing help wanted signs” from employers.

“This is problem that is an addiction we can’t arrest ourselves out of; it’s a crisis and it’s going to require a very different way of thinking.”

Congressman Jim Banks (IN-03) outlined what’s going on with immigration. He said if he’s learned anything in the 21 months he’s been here “it’s how complex immigration policy can be”, citing the trend to roll virtually every possible aspect into one bill an “immovable object”.

Still, he notes that despite disagreements on the subject, there are several areas where there is “consolidated, broad – even bipartisan – support.” Heading that list is securing the border.

“Currently there are over 11 million illegal immigrants in this country, accounting for 3% of our overall population,” Banks noted.

Meanwhile, Rep. Pete Visclosky (IN-1), took on the topic of environmental matters. He said that “as we transition economically, we need to use carbon as intelligently as possible, to understand it still has an outside presence in our economy and not to simply wish it away.” Visclosky also noted his believe in climate change and talked about what that has done.

Additionally, we were pleased to have with us Ed Mortimer of the U.S. Chamber; he wrapped up the briefing segment with a look at recent wins achieved in the transportation arena and the need for a long-term, sustainable infrastructure funding bill – something the Indiana Chamber has been pushing for years. 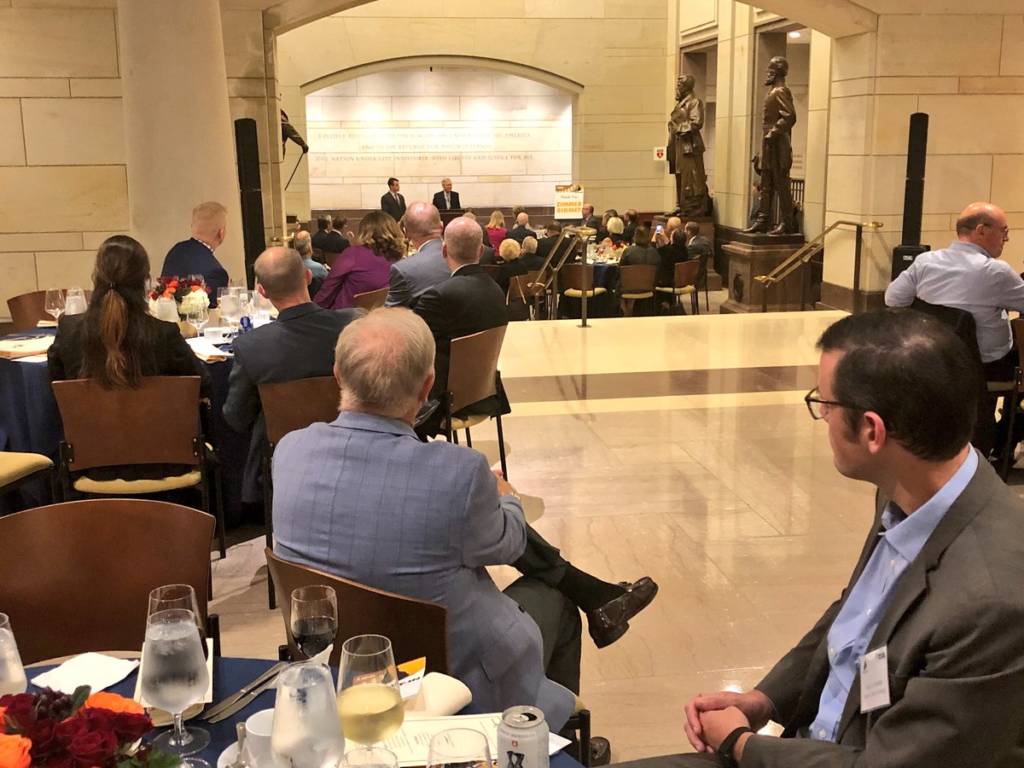 The event once again took place in the Congressional Visitor Center Atrium.

In addition to the Senate Majority Leader, both of Indiana’s senators – Joe Donnelly and Todd Young – addressed the crowd at dinner, where Congressman Luke Messer (IN-6) provided the invocation.

Also on the evening agenda was Neil Bradley, executive vice president and chief policy officer of the U.S. Chamber.

He touched on how recent tax and regulatory reforms have fueled growth, plus looked ahead to issues like immigration, trade and transportation that hopefully will be taken up by Congress next year. Bradley also examined what’s at stake in the midterms.

On day two at the breakfast briefing, Kirsten Hillman, Canada’s deputy ambassador to the U.S. offered insight on the Indiana-Canada trade relationship; Indiana is Canada’s top trading partner and she spoke of the overall importance of the two countries continuing to work together.

“There is no region of the world that [Canada/U.S.] can’t compete with. We have highly-educated, highly-skilled workforces … it’s a highly-desirable marketplace for people and companies to invest.”

The Fly-in concluded with visits to congressional offices to meet with key staff and legislators; Young and Rep. Larry Bucshon (IN-8) were among the delegation members who personally took part in these.

Eric Halverson, of The Kroger Company, wrapped up how the trip went in a post on Twitter Thursday: “Thank you, @IndianaChamber, you provided a full and informative Fly-in, as always. A great investment!”