Celebrating the Veterans at the Indiana Chamber

Today, on November 11, we are reminded to thank the men and women in our lives who have sacrificed time with their families to defend our country in the United States Armed Forces. We can find these people anywhere – our families, our churches and in the workplace.

Here at the Indiana Chamber we have two team members who are veterans, and we would like to celebrate them today. 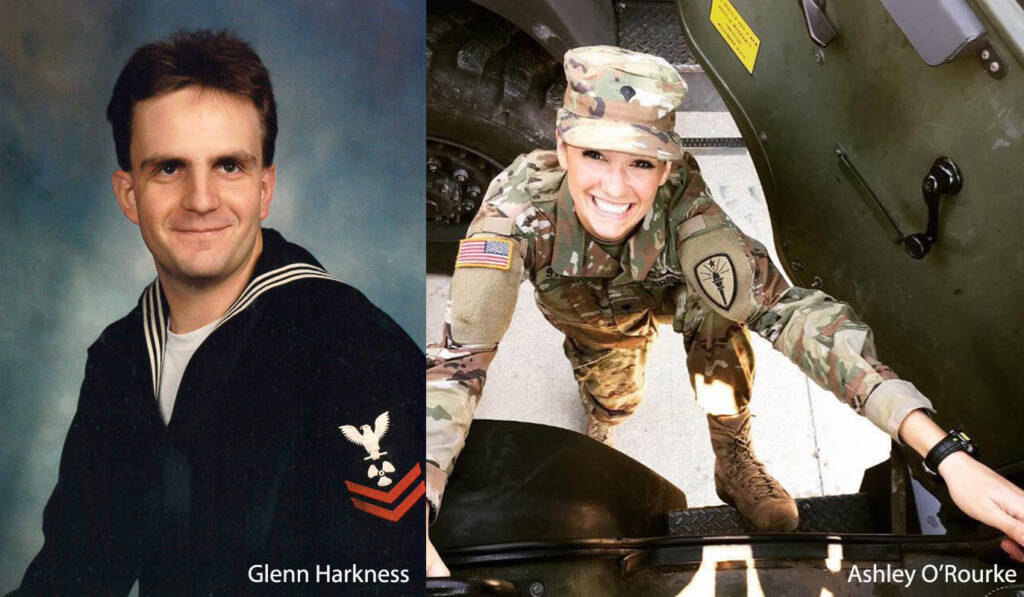 Technical director Glenn Harkness joined the staff in 1999. Glenn grew up in Indianapolis and enlisted in the U.S. Navy in 1985. He served as a machinist’s mate aboard the USS Merrimack and the USS Theodore Roosevelt.

Glenn wasn’t sure what career path to take after high school but had a sense of duty and obligation to give back to our country.

“The Navy truly lets you see the world,” he says. “And I liked the idea of working in the engine room of the ships.”

Glenn notes that in his six years on duty in the Navy he matured as a person and learned about different cultures.

“The world is a big place with lots of different people, traditions, approaches and viewpoints. Most will amaze you if given a chance without pre-judging. I found this with both the people I served with and the countries I visited,” he adds.

Ashley O’Rourke was welcomed to the Chamber’s staff just last month as director of community and employer engagement for the Wellness Council of Indiana. She grew up in Greenfield, but was born in Okinawa, Japan, where her dad was stationed.

Ashley followed in the family tradition of military service and enlisted in the Army National Guard in 2015. She is a combat medic with the 738th Medical Company out of Lafayette.

“I take a lot of pride being the first female in my family to serve in the armed forces. I have always had a desire to break female stereotypes and be a strong role model for young women. My younger sister soon followed my enlistment and has found great success in her military career,” Ashley says.

She agrees with Glenn about how the service helps you to learn and grow as a person.

“The military has taught me to operate at a very high level, in the most stressful of situations. Throughout my training I’ve developed invaluable leadership skills that I translate into my civilian life. And I have found lifelong friendships in my unit,” she offers.

So, don’t forget to thank your favorite veterans, whether they are far away, at home or in the next office or workstation. Happy Veterans Day to our soldiers, both past and present. We owe you our freedom and our gratitude!

Thank you – Glenn and Ashley!