My introduction to the women’s suffrage movement came from the movie “Mary Poppins.”

In my young mind, Winifred Banks, the mother in the story, must have had a pretty important job if she could afford a nanny for her kids. She also got to wear a very fancy dress and sash, which made her work more exciting and meaningful. 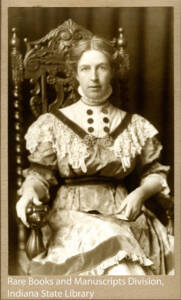 I was very young. And I was right.

As we grow older, our understanding of stories in books and movies evolve as we learn about the world and how we relate to one another.

I now understand that Winifred was a volunteer who was fighting for the right to vote for women in England. She was a member of Emmeline Pankhurst’s political organization, the Women’s Franchise League. Pankhurst is a very real hero in British history.

Here in Indiana we have a rich history within the women’s suffrage movement. One such suffragette was Grace Julian Clarke, a newspaper journalist and author, from Centerville. She was the daughter and granddaughter of famous abolitionists and members of Congress.

Her family was truly enlightened and exposed her to social reform issues from a young age. Clarke helped to found and lead the Indiana State Federation of Women’s Clubs, the Legislative Council and the Indiana’s Women’s Franchise League.

She served as a columnist for the Indianapolis Star from 1911 to 1929, during the time when Hoosier women won the right to vote. Indiana was the 26th state to ratify the 19th Amendment in 1920 and we will soon be celebrating the 100th anniversary of that historic moment.

The Indiana Women’s Suffrage Centennial Commission is working to create a legacy that honors and celebrates this important milestone in our state’s history. There are several events planned for 2020.

The commission is calling for Indiana-based artists to submit proposals for an original work of art to be displayed in the Indiana Statehouse to commemorate the ratification. To learn more about submitting a proposal, click here.

Visit indianasuffrage100.org to learn more about the commission and its activities.