Cars Are the New Homes in Expensive Cities

It’s hard to picture the real estate difficulties in California and other areas of the country until you see it for yourself.

I visited a friend in San Francisco earlier this year and was shocked to view the situation first-hand. For instance, my friend rents a room in a rent-controlled house for $1,200 a month. If the original roommate ever moves out, her rent will at least double. A room in a house for $1,200 a month is a pretty reasonable price for the area in which she lives, in the Lower Haight district.

The most memorable instance on this topic involves me chatting with our Lyft driver (that was my favorite thing to do in San Francisco, chat with the locals). A truck driver by trade, our driver mentioned using his vehicle for Lyft is his side hustle to make some extra money. Part of the reason is to be able to afford the cost of living.

Not only is my house here in Indiana almost those exact specifications, but it was far less expensive – under $120,000. And when I told him that, he gasped and slightly swerved the car.

(Side note: don’t shock – even inadvertently – the people that hold your life in their hands!)

And here’s where this article from MSN really resonates with my few days’ worth of experience: People in California are dealing with the expensive housing market and sky-high rent by living in their cars and vans. 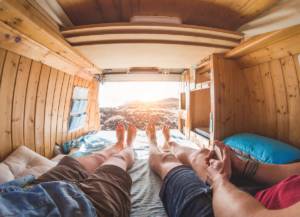 Look no further than California, where the median price for a home is at a record high of $600,000 and sleeping in cars is a common occurrence. A recent Slate article explored the rising epidemic on America’s West Coast and found that 15,000 people live in cars, vans, and RVs in Los Angeles alone, citing the US Department of Housing and Urban Development. That’s not counting car dwellers in other expensive California cities, like San Diego and San Francisco.

The problem has become so severe that local governments are trying to “tighten parking restrictions or ban vehicle residency,” writes Slate reporter Amy Pollard. These crackdowns have led to the rise of safe parking programs. Run by nonprofits and some city governments, they try to accommodate vehicle residents with safety rules and regulations, according to Slate.

Dreams for Change in San Diego runs three lots with 150 spaces and 325 residents (people often share a car) – each space costs $2,950 a year for the company to operate. Caseworkers visit often, there is no entry after 10 p.m., RVs aren’t allowed, and neither are sex offenders.

“In the tight housing markets of West Coast cities, it’s not just the destitute or the unemployed who see their cars as their best option,” writes Pollard, adding that the residents of Dreams for Change consist of families, retirees, and even tech workers making near six figures.

Graham Pruss, a researcher and former outreach worker for Seattle’s Road to Housing program, told Slate that cars are “a new form of affordable housing” in Seattle too, adding that he’s met Amazon workers who live in vehicles while saving up money to buy a home one day.

It’s no surprise then that people are moving out of Silicon Valley to areas like Indianapolis, where the cost of living and housing prices are much lower, and the technology job market is growing.

Check out a story in our upcoming September-October edition of BizVoice® (out next week) related to this topic. The article offers some important tips for companies seeking to lure talented Hoosiers back home. Find it at www.bizvoicemagazine.com.