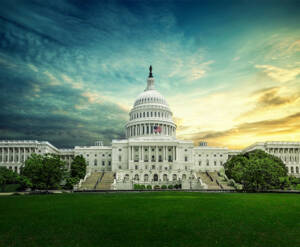 A storm is brewing in Washington, D.C., and tech companies are in the crosshairs.

Democratic lawmakers Sen. Elizabeth Warren (Massachusetts) and Rep. Alexandria Ocasio-Cortez (New York) recently introduced new legislation that would direct the Federal Trade Commission (FTC) to place a near-universal moratorium on mergers and acquisitions, including those in the tech industry, until the agency decides small businesses and their employees are no longer suffering financially.

The Pandemic Anti-Monopoly Act (PAMA) covers mergers and acquisitions involving companies with over $100 million in revenue, businesses controlled by private equity companies and hedge funds, and organizations that control a patent on sought-after personal protective equipment. Recently, 27 left-leaning national and state organizations sent a letter, which emphasizes the dangers of concentrated power and warns of a coming merger wave financed with public money, to Speaker Nancy Pelosi and Minority Leader Chuck Schumer, urging them to include PAMA in the next COVID-19 relief package.

If passed, PAMA would likely impact two tech deals allegedly in the works. Amazon is rumored to be interested in acquiring movie theater operator AMC Entertainment, whose stock price has fallen more than 35% since early March. And the Wall Street Journal reported last week that Uber Technologies Inc. and Grubhub are discussing a deal that would unite the meal-delivery company with Uber Eats as the coronavirus pandemic has sparked a surge in demand for their services.

Makan Delrahim, the top antitrust official at the Justice Department, believes a pandemic moratorium on big corporate mergers would be “misguided.” Delrahim added that the COVID-19 crisis should not be used to block “pro-competitive” and “necessary” transactions that would “ensure companies’ survival and keep workers employed.”

I agree with Delrahim. First, government’s role in corporate transactions should be minimal. Second, anti-trust issues aside, mergers and acquisitions are something to celebrate. The seller reaps its reward for starting and running a company with demonstrable value, and the buyer is positioned to ensure the survivability of an existing firm while improving its market position. Companies, entrepreneurs and investors typically all benefit from transactions they freely chose to execute.

In his Squawk Box interview, Delrahim paraphrased a quote by H. L. Mencken that says, “There is always a well-known solution to every human problem – neat, plausible and wrong.” PAMA is using the pandemic as a reason to block legal and beneficial transactions by implying FTC regulators are incapable of carefully scrutinizing mergers during the crisis.

In time, we will Monday-morning-quarterback all decisions made by our civic leaders – the good, the bad and the unconscionable. Placing a moratorium on corporate mergers and acquisitions due to the COVID-19 pandemic is not only unconscionable – it is wrong.