As amended, says the court may consider bias in imposing a criminal sentence.

The Latest: Approved by the Senate Public Policy Committee 9-1 on Monday. On second reading on Tuesday, the list of protected categories was removed via a Senate majority-led amendment by Sen. Aaron Freeman (R-Indianapolis) that passed 33-16. Then on Thursday, the amended bill passed the full Senate 39-10; the only Republican to vote “no” was co-author Alting, who said he was keeping a promise he made to his constituents that bias crimes legislation should have a list of protected categories.

Chamber Action/Commentary: The Chamber is a strong supporter of the state Legislature passing a comprehensive bias/hate crimes bill and has made it a priority. We commend co-authors Mike Bohacek and Ron Alting for their original bill and continued efforts. 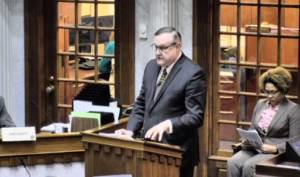 During the committee testimony on Monday, Chamber President Kevin Brinegar addressed why passing a comprehensive bias crimes bill is so important to the business community.

“Our member companies are in an intense battle for talent as they struggle to find enough skilled workers, and they believe that it is simply the right thing to do. Consider that for the first time in our country’s history that there are more job openings than there are job seekers. Therefore, it is critical to remove any or all strikes against Indiana – such as not having a bias crimes statute – to assist our employers in filling their own positions, so that they can compete effectively in a global economy.”

Thus, we are deeply disappointed in the Republican majority for removing the protected categories and for not doing its job – in this case to clearly eliminate the unwarranted, but existing, perception by some that Indiana is an unwelcoming state. The current bill will not protect persons of all races, religions and lifestyles.

Nearly 75% of Hoosiers support passage of a bias crime law. Republican, Democrat, white, minority, urban, rural, young and old voters all are in strong support. This debate is now about politics within the Statehouse, not among Indiana voters. It is time for legislators to truly represent the wishes of their constituents.

Brinegar’s statement issued to the media after Thursday’s vote by the full Senate:

“Unfortunately, what passed the Senate does not meet the all-important criteria of a meaningful bias crimes law. The Indiana Chamber and its members will continue to work with all legislators to do just that. We agree with Gov. Holcomb that the current legislation does not even remove Indiana from the list of five states without a bias crimes statute.

“With more than two full months left in this legislative session, there is still time for the House to properly address this issue and for the Senate to act again – this time to pass a comprehensive law. If the General Assembly fails to do so, it will only unnecessarily fuel this controversy.

“There is no rational reason not to pass a meaningful and comprehensive bias crimes law this year to remove Indiana from the list of five states without one. Our state’s reputation is at stake. We must send a strong message of inclusiveness to help ensure our state’s future success.”

We knew it was going to be a tough task to get the majority of Republican senators to embrace the introduced version of the bill – and all indications were that the majority of the caucus had to be on board to go forward – yet we are nonetheless left frustrated by the turn of events.

The Chamber board-adopted bias crimes policy position states that we support a bias crimes statute that is both as inclusive as possible and articulates specific categories of individuals and groups to be protected – including race, religion, national origin, gender, disability, age, sexual orientation and gender identity. We will continue to pursue that goal!

We now turn our attention to House members, who have expressed reservations about including a list of protected categories, and encourage the Governor to continue to play an active role in helping drive the desired outcome.