Chester Finn and Andrew Scanlan of the Fordham Institute offer a thoughtful look at the Advanced Placement (AP) program and why it has been successful compared to other education reform efforts. 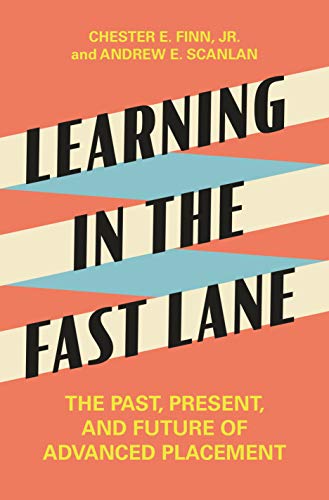 The program’s success is all the more remarkable considering how big it’s become, even while maintaining its curricular quality and intellectual rigor: Some three million high schoolers sat for some five million AP exams in May, spanning thirty-eight separate subjects. Despite stiffening competition from dual enrollment and a few other course providers, it’s by far the largest source of college-level work for American high school students.

Yet instead of dumbing it down to attract more kids, the College Board has done a commendable job of preserving the attributes that built its reputation in the first place.

How has AP succeeded – and endured and grown and not gone squishy – where so many other innovations and reforms have failed?

First, AP is private. It’s not a government thing, certainly not a federal thing like Race to the Top or No Child Left Behind. The nonprofit, nonpartisan College Board operates it, and does so with mostly private dollars, though districts incur costs when they offer AP courses and a number of states and districts subsidize kids’ exam fees. Those costs inevitably compete in school budgets with other priorities, yet the private nature of AP means that politicians don’t have to approve what’s taught, what’s tested, or much of anything else.

Second, AP is a demand-driven reform that’s almost always voluntary for districts, schools, teachers, and kids alike. Neither the states nor the feds have much to do with it. AP has spread mostly because parents and students want it and see value in it. It has also thrived because thousands of teachers love the challenge and stimulation of AP classrooms. Try to name five other education reforms that attract students and teachers in this way!

Third, AP isn’t all that disruptive an innovation. Unlike charter schools, voucher programs, and virtual schools, it’s not a newfangled institutional form – and it doesn’t usually lead kids to change schools. Unlike personalized learning and online instruction, it’s not a pedagogical or technological novelty. Unlike so many reforms of recent decades, it’s something teachers generally welcome – and those that want no part of it are generally free to keep doing what they’ve always done.

Fourth, successful completion of AP courses and exams yields actual and valuable benefits for the young people who participate, particularly for those who also score at least 3 on the AP exam scale from 1 to 5. Such a “qualifying score” gives them a good shot at arriving in college with credit already established and/or waiving out of boring freshmen courses and possibly earning their degrees faster and cheaper.

Students also acquire a backpack full of study skills and practices that will help them succeed in college and beyond; gain a welcome boost in their admissions odds, perhaps to better colleges than they would otherwise even have applied to. Success on AP may also confer confidence that yes, one is indeed “college material,” while serving as external validation of one’s transcript, class rank, teacher comments, etc.

AP faces its own challenges, to be sure. It’s not cheap for either schools or kids. In the hands of a weak instructor, it can resemble “teaching to the test” (though AP exams come closer than just about any others to being “tests worth teaching to”). Small, rural schools can seldom offer much of it, and even the best high schools face big obstacles in trying to get perfectly able kids to succeed at AP-level work when they arrive from mediocre (or worse) middle schools.

AP’s major outstanding challenge, as it continues to open its doors to more – and more – diverse students (and that job is certainly not finished), is to ensure that many more of those kids leave its classrooms with scores of 3 or above. That takes significant effort, no small amount of resources, and a tremendous change of mindset by teachers and school leaders alike.

But perhaps the biggest lesson from AP’s tremendous growth and solid reputation is that much good can be done by voluntary – even niche – ventures that meet some kids’ (and teachers’ and schools’) needs without necessarily serving everyone, without overhauling structures, and without getting too tangled up in government, regulation, and standardization.