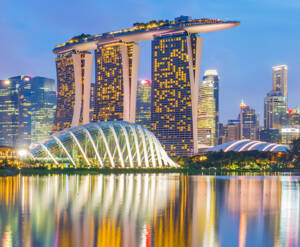 A recently released, first-of-its-kind report ranks the “smartest” cities in the world. I am not talking about IQ-type smart, but cities that have demonstrated the highest levels of success in embracing smart technologies to improve the lives of their citizens.

The IMD Smart City Index 2019 (SCI) is the result of two years of intense work by the IMD World Competitiveness Center’s Smart City Observatory and Singapore University of Technology and Design. SCI was constructed by using more than 12,000 survey responses from residents living in 102 “smart cities,” defined as an urban setting that applies technology to enhance the benefits and diminish the shortcomings of urbanization.

Respondents evaluated their city’s attention to infrastructure and technology across 36 indicators relating to health and safety, mobility, activities, opportunities for work and school, and governance. Results were weighted against responses from comparable cities.

What can we learn from the SCI and how can it be applied to an imminent public policy topic in Indiana?

The authors’ thesis is that the momentum of technological innovation will continue to increase and give us new ways to address pending global challenges – and the majority of individuals whose lives will depend on such choices will be city dwellers. The SCI, relative to other smart city indices, is an attempt to capture how citizens consider their cities are becoming smarter holistically rather than one-off technological improvements.

For example, Singapore’s residents gave above average responses in all but two of the 36 indicators. They selected affordable housing, road congestion and air pollution as their top three priorities to address. Singaporeans have very positive attitudes about using advanced technologies to tackle these priorities, even if it means sacrificing personal data.

By comparison, Philadelphians gave below average responses in all but three of the 36 indicators. They chose affordable housing, security and school education as their top three priorities but are far less comfortable with embracing technology as a means to address these issues.

Looking ahead toward the 2020 legislative session, one issue that promises to be on lawmakers’ agendas is regional development – a key benefit of which is the ability of jurisdictions to pool resources to address region-specific problems. But regions, and their residents, need to become “smarter.” Regional development plans need to contemplate holistically how the region intends to establish an environment that attracts and retains talent.

The authors of the SCI conclude that being a “smart city” is critical for attracting investment and talent, creating a potential “virtuous cycle” in favor of an advanced group of cities. They also note the difficulties that government leaders, investors and citizens face when choosing to make their communities “smarter” because the subject matter is complex and often relies on imperfect or asymmetrical information, saying that quality of life seldom receives priority over urbanistic, architectural or technological ambitions, and efficiency sometimes eclipses social harmony.

These lessons are applicable to regional development decisions as well. When thinking about how to address regional development, we need to require a holistic approach that leverages technology to establish a quality of place plan. The outcome, in time, will be “smart regions” throughout Indiana that are uniquely attractive and equally hospitable to future generations of diverse and talented individuals.